Farm Chat – Coffee with the Corrigans 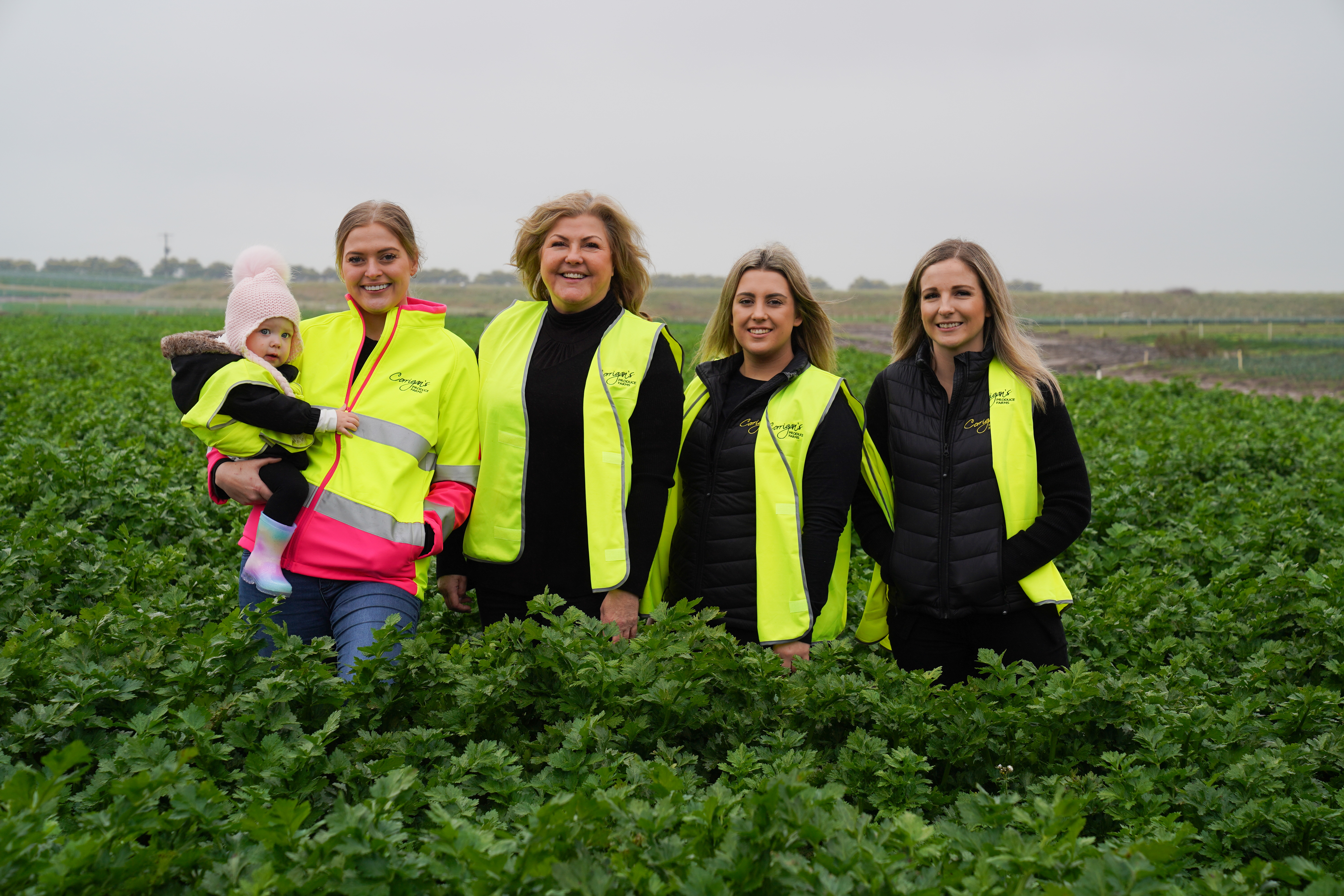 Sitting across the road from one of these fast-growing housing estates is prime productive land, owned and operated by the Corrigan family. It is in these soils that one of Australia’s leading produce businesses has taken root.

A sixth-generation farming family, the Corrigans originally emigrated from Ireland seeking gold before settling on land in Keysborough back in 1854. It was here that the Corrigans began growing vegetables and selling their produce to the Melbourne markets.

The Corrigan family farm is now based in Clyde, south-east of Melbourne, after making the move to that location in the 1960s. It is a move that set the foundations for what has become a thriving business.

Corrigans Produce Farms are Australia’s biggest producer of kale, and also grow celery, leeks, cos, silverbeet, pak choy, onions and celeriac to supply major supermarkets and fresh markets around Australia. Their operations continue to expand with the recent purchase of another farm just down the road in Devon Meadows and further moves into exporting.

Perhaps the most impressive element of the Corrigan’s business is not just how they’ve managed to remain a family operation, but are successfully training up younger, next-generation family members to ensure it remains that way well into the future. While some family businesses struggle to navigate succession planning, the Corrigans seem to have it sorted, in the form of a team of young, intelligent and innovative women ready to follow in their family’s footsteps.

We are here to chat with Deborah, co-director of Corrigans Produce Farms, and her daughters Stephanie and Daria, and niece Stacey. 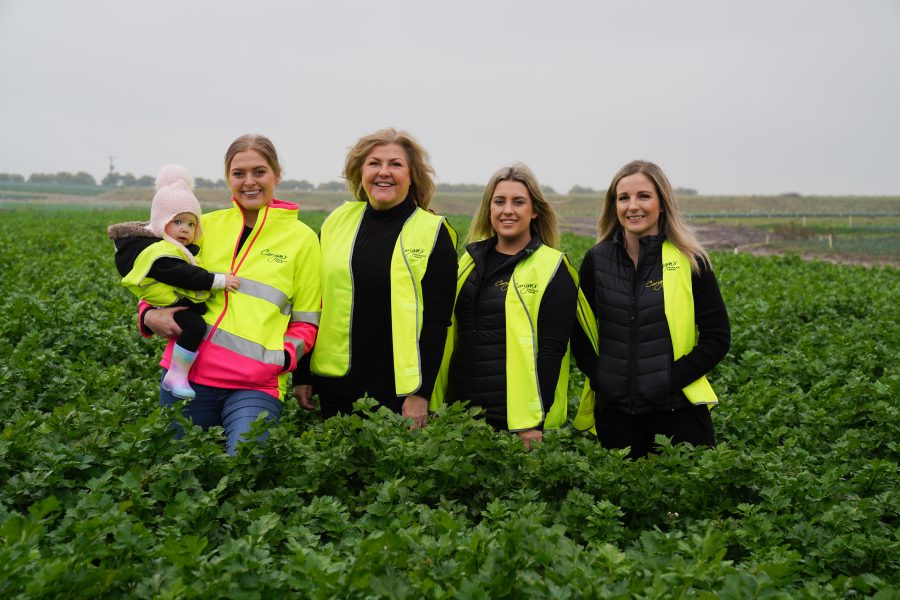 Walking into the head office,  the family environment is immediately apparent. We are greeted by the eldest of the Corrigan daughters, Stephanie, and her one-year-old niece Blaire, who lead us to Deborah’s office and boardroom where she is immersed in paperwork.

Deborah Corrigan is an impressive personality, easily able to command the attention of a room.

“There’s no such thing as an ordinary day,” exclaims Deborah as she joins the table. A far cry from her intended career as a beauty therapist prior to joining the family business, Deborah now faces the daily dilemma of wearing a multitude of hats – accountant, auditor, business developer, crop master planner, QA officer and (somewhat reluctantly), HR officer. As Deborah’s career direction has changed, so too has the direction of the business. But early on there were some obstacles to overcome.

Now sharing the role of Director with her brother Darren, Deborah has been actively involved in the business for 29 years and oversees all aspects of farm operations.

“When I had Stephanie I started doing a bit of part-time work. I wanted to be more involved with the farm, but I wasn’t allowed to as I was a girl and back then, the farm was no place to be when you’re a girl”.

Deborah was determined to push on with her career aspirations and became a member of the Victorian Vegetable Growers Association (VGA, now AusVeg Vic) like her grandfather and father before her.

“I was probably one of the first females. I had to earn my stripes,” says Deborah.

“She got asked to make coffee, not sit at the meeting table,” adds Stephanie.

They were different times, but experiences that Deborah reflects on as formative.

“I got through it all, and I’ve got the respect of all those people now but it wasn’t easy,” says Deborah.

This work ethic was instilled in her at an early age by her father, from whom she would eventually take over business operations. Her father was always supportive of Deborah’s increasing interest in working in the family business – GC Corrigans & Sons – as it was known then.

“I got rid of the Sons! The next truck – I refused to let him have the word ‘sons’ on it,” laughs Deborah.

“My Dad was a really smart man and he saw the value in doing that – he never held me back.”

For a Corrigan, working in the family business is almost a genetic predisposition, so when it came to Deborah’s daughters following in their mother’s footsteps, there wasn’t much of a choice.

Both daughters and their cousin have found their way back into the family business, after initially pursuing alternative career options before they found their fit on the farm. It’s a move that seems to be working out for everyone.

“An issue I see in the industry is succession” states Stephanie.

She recalls that when growing up, the farm wasn’t seen as an ideal career option and was even discouraged at times by her teachers and parents.

“At school I remember if I didn’t do well on an exam,  I‘d get threatened that I’d end up on the farm like it was a bad thing. That mentality was pushed on my generation but only now are we seeing that this is a vast industry with many opportunities.”

Technology, globalisation and increased scale within the industry has led to the emergence of a variety of roles requiring specialised skill sets beyond agricultural science. Today, Engineers, IT specialists, Marketers, Accountants, Finance and HR Managers are just as valued on a big farm as they are at a corporate office.

Currently, the girls divide their skills across key areas of the business. Stephanie is in the field assisting with the crops and customer relationships. Daria is driving operational improvement and supporting in HR and Stacey focuses on Logistics and QA.

“They’ve only really understood what my life was like since they’ve come to the farm,” says Deborah.

Beside the girls, Deborah’s son Tate has also joined the business after deferring his studies and enjoying a gap year on the farm, honing his work ethic. The year has given him a fresh perspective on his career options and is now looking to study Agricultural Science rather than Engineering.

“He’s thriving. Six months ago he wouldn’t have thought there was a future for him on the farm” says Stephanie.

This family business seems to face the same inter-generational challenges as many others.

“It’s a bit of a battle between the younger gen wanting to use technology and the older gen wanting to use their spreadsheets,” says Daria. Corrigan Farms legend has it that Director Darren still holds onto a battle-weary ledger to record key crop information and orders. Deborah isn’t so old school, preferring spreadsheets over specialised software packages. As the younger generation grow in experience and influence, they hope to see a move to working smarter and not harder thanks to the efficiency that technology affords.

Social media has been something that the Corrigan girls have been quick to embrace for their business, being one of the more active players in this space within the industry.

“We’ve done projects with influencers and chefs and bloggers on Instagram. We send them our vegetables, they cook with them and post about it,” says Stephanie

“We also find our customers are getting into it more and wanting us to be involved in their social media,” says Deborah.

The Corrigans also use social media as a way to recognise their hardworking and loyal staff, often getting strong social followings from the employees’ overseas families. The family ethos stretches into the general workforce, with multiple generations having worked in the business.

“A lot of the employees have been here for years. They’re part of the family too. These are people here who have watched us grow up. It can have its difficulties sometimes. For example, I am helping with QA and OHS and there are people who have been working here for a long time and you’re this little girl coming out to tell them to put gloves on!” laughs Daria.

The strong relationships the family have forged with their staff is clear when we walk through the bustling packing shed. The girls proudly show off a tightly coordinated operation, interacting with dozens of workers as we weave our way through leek and celery packing lines. It’s a multicultural environment, but the family vibe is clearly present as multiple workers stop to talk and play with baby Blaire.

With such a close-knit working environment, you could forgive the family for wanting some space outside of working hours, but this doesn’t seem to be something that’s possible or desired.

“I find I’m accessible 24/7 – I think that’s because it’s a family business, so you don’t resent it. You want to help” reflects Daria.

One of the big challenges facing this and future generations of urban-fringe farmers is encroaching development. The Corrigans’ farm sits across the road from the sprawling Clyde development in the City of Casey – Victoria’s most populous municipality.

“Our land is at threat because the council rates have gone up and they want to push us out.” explains Stephanie.

Packing up and moving on (even if for the right price) is just not an option for the Corrigans – something developers don’t seem to understand. Although the family have successfully moved farms before,  it takes time to transform an old cow paddock and build up the soil profiles to a standard for vegetable production.

“We’ve been working this land for years. We have all of our infrastructure and people just turn up thinking we can sell tomorrow. It’s ridiculous!” says Stephanie. “At the same time, we quite like having McDonalds down the road.”

You can tell by their formidable focus, passion and resolve that the Corrigans will be going nowhere too quickly. The plans to ensure the future success of the family business are already underway in the form of Stephanie, Daria, Stacey and Tate.

“The plan is for them to do more and for Darren and I to do less,” says Deborah

“We also want to have more community involvement, selling directly from the farm to the local community, do site tours and show people that farming isn’t what they think it is,” states Daria.

The girls also hope they may see work/life balance become more of a focus due to the efficiencies afforded by technology.

“Our generation has had more of the idea of work/life balance pushed at us,” says Daria.

“If you can enhance your efficiencies you can do both well.”

Some may think that the balance is already pretty good. Seated with us during our chat is Daria’s daughter Blaire, who often goes to work with her mother and devoted aunt and grandmother.

It’s not hard to imagine that in just a decade or so, she’ll be getting her first taste of working in the business and following in the family footsteps of the clever and capable women who have gone before her.

The Christmas season is synonymous with indulgence and food. We’ve all been guilty of overdoing it when it comes to 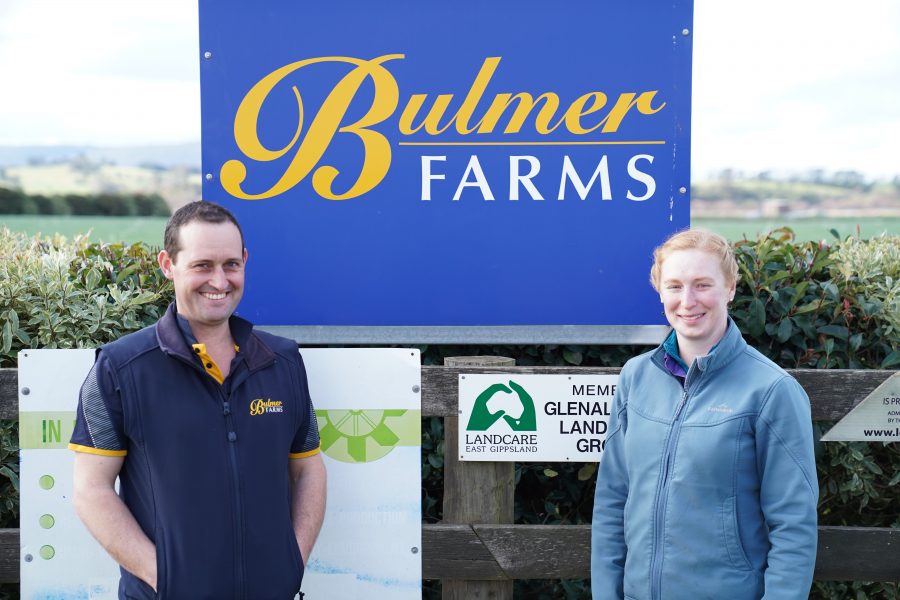 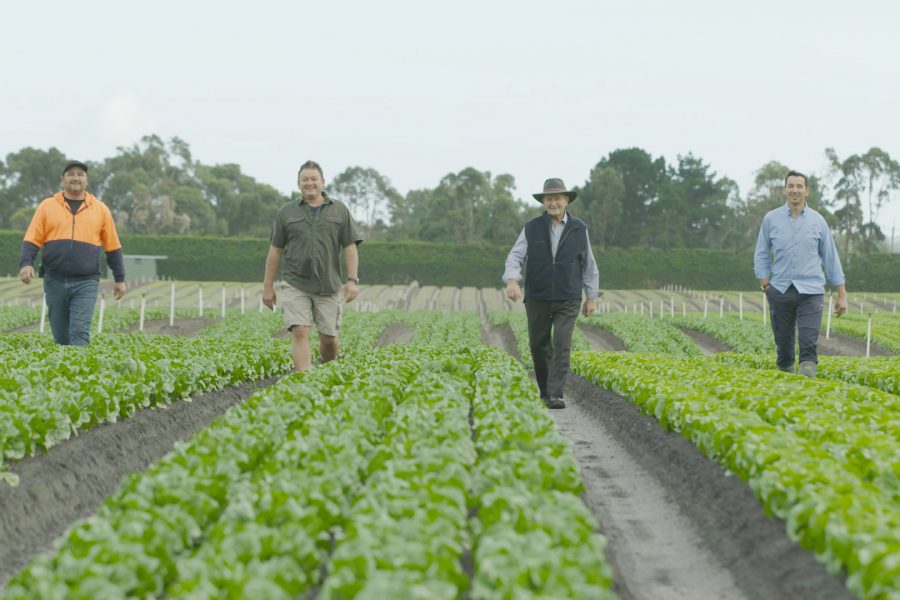